Gallstones (biliary calculi) are small pebble-like substances that form in the gallbladder.

The gallbladder is a small pear-shaped sac that lies below the liver. Bile is made in the liver, and stored in the gallbladder until the body needs it. The presence of fatty foods triggers the gallbladder to squeeze bile into the small intestine. Bile helps with digestion and breaks up dietary fat. It contains water, cholesterol, fats, bile salts, proteins, and bilirubin (a waste product).

If bile contains too much cholesterol, bile salts, or bilirubin, it can harden into gallstones. Gallstones can block the normal flow of bile if they move from the gallbladder and lodge in any of the ducts that carry bile from the liver to the small intestine.
The ducts include the:
• Hepatic ducts - which carry bile out of the liver.
• Cystic duct - which takes bile to and from the gallbladder
• Common bile duct - which takes bile from the cystic and hepatic duct to the small intestine.

There is no single cause of gallstones. From the size of a grain of sand to a golf ball. The gallbladder can develop just one large stone, hundreds of tiny stones, or a combination of the two. The three types of gallstones are cholesterol stones, pigment stones and mixed stones. Cholesterol stones If the liver produces too much cholesterol, cholesterol crystals may form in bile and harden to become stones. Cholesterol stones can grow to significant sizes, large enough to block bile ducts. Pigment stones Numerous, small dark stones form because of changes in other bile components or because the gallbladder fails to empty normally. Mixed stones These are the most common type and tend to develop in batches. They are composed of cholesterol and salts.

Gallstones become more common with advancing age and can be found in up to 15% of people 50 years and over. They are more common in women than in men, in people who are overweight and in those with a family history of gallstones. People with diabetes, taking cholesterol lowering medicines or who lose a lot of weight quickly are also more at risk.

Treatment will usually require surgery open or laparoscopic removal of stones from the bile duct. If you have frequent gallbladder attacks, your doctor may recommend you have your gallbladder removed (Cholecystectomy). Surgery to remove the gallbladder, a non-essential organ, is one of the most common surgeries performed on adults. This surgery is usually done by ‘keyhole’ surgery, using laparoscopes. The operation requires three small incisions in the abdomen and usually 1 or 2 days in hospital. Occasionally, ‘keyhole’ surgery is impossible or risky and the gallbladder is instead removed through a longer incision below the right ribs. This is called a laparotomy or open surgery This requires a longer hospital stay, perhaps up to 8 days.

Operations such as these are very safe but always carry a small risk of problems during surgery (such as bleeding or damage to the bile duct) and of later complications such as chest infections. Occasionally, x-rays taken during the operation show a stone in the bile duct that requires a later endoscopic procedure (ERCP as described above).

If you are concerned about possible risks, ask your doctor for further information.

What are the treatment options?

Medical treatment may not be necessary unless the gallstones present symptoms.

Treatment depends on the size and location of the gallstones, but may include:
• Dietary modifications – Limiting or eliminating fatty foods and dairy products.

• Surgery - If you have episodes of pain, your doctor may recommend an operation to remove the stones from the bile duct or the entire gallbladder, Cholecystectomy

• Lithotripsy - A special machine generates sound waves to shatter stones. This treatment is used for those people with small and soft stones, which accounts for around two out of 10 cases of gallstones with symptoms.

• Medications-Some drugs can dissolve gallstones but this treatment is only rarely given, due to side effects and a variable success rate.

Urgent treatment is required if complications such as jaundice or infections in the gallbladder or bile duct occur.

What symptoms do Gallstones cause?

• Pain in the abdomen and back. Pain is generally infrequent but severe.

• Increase in abdominal pain after eating a fatty meal.

Will an operation cure my symptoms?

Surgery will cure many symptoms arising from gallstones. 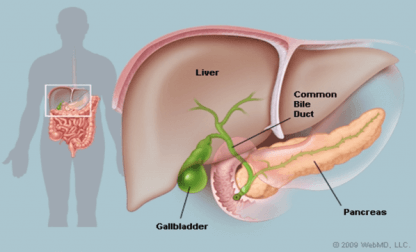